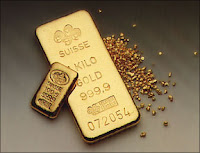 There seems to be a big disparity between gold shares and gold bullion. While gold bullion and spot gold have been increasing around 12 percent this year, shares of gold miners have been falling around 15 percent. In fact the smaller gold miners are down much more, around 40 percent.

This gulf between the price of gold and the price of gold shares has caused acute pain for some of the biggest names on Wall Street including John Paulson, George Soros, David Einhorn, Seth Klarman and Thomas Kaplan, a few of which went for gold mining shares instead of gold bullion.

In an interview recently with King World News, Egon von Greyerz, founder and managing partner at Matterhorn Asset Management out of Switzerland, spoke about the big drop in gold recently. "... I’m not really surprised because last time I talked ... I did say gold could go down to $1,550 support and maybe even $1,420. In my view that would be quite normal in a very thin market and I said that would probably happen by the year end."

"But this is all a thin paper market; we have not seen one single physical seller of gold or silver at these prices. So it’s just manipulation and panic in a paper market at the year end. Of course, it's easy for anyone who wants to intervene to push the price down even further in a thin market. So I think that’s what’s happening and I wouldn’t worry the slightest bit. "

When asked where he sees gold heading in 2012, von Greyerz responded, "I wouldn't be surprised to see several thousand dollars (for gold), let’s say between $3,000 and $5,000 next year. I see that as the next move and fundamentally everything supports that. "

Getting back to the subject at hand, possibly the slow in gold mining stocks is influenced by concerns mining costs are rising and governments are beginning to see resource stocks as a easy tax target. This plus the fact that some gold miners also dabble in other resources which can affect the share price adversely. In addition mining companies sometimes diversify their profits into areas not related to gold.

"When you sell your portfolio, you say, well, what's cyclical, and that includes mining stocks," says Patrick Chidley an analyst at HSBC. He called gold-mining stocks a "buying opportunity" in a June research report.

For example, one long time gold investor, Mr. Kaplan, who administers a family fund held over 50 million shares in Novagold Resources Inc., whose stock dropped a massive 40% this year. Mr Kaplan also owns over 60 million shares of Gabriel Resources Ltd., A mining company with a huge gold project in Romania, down more than 20% this year.

Although these declines have cost Mr. Kaplan about $430 million this year, he bought in at price considerably lower than today’s figures and is still holding huge profits on gold.

"Our focus is on adding to our holdings, especially mines and equities in safe" jurisdictions, says Mr. Kaplan, who believes gold shares are due for a rebound.
Seth Klarman's Baupost Group, a value-oriented firm, owned nearly 13% of Gabriel at the end of the third quarter. He added to his position through much of this year, according to regulatory filings. Mr. Klarman also bought five million shares of Novagold in the third quarter.

"It's a little perverse that gold loses value when there's a currency crisis occurring in Europe" that should spark interest in gold", says Darren Pollock., who helps run Cheviot Value Management, LLC in Los Angeles and has been a fan of gold shares.

So while gold shares have, for the most part, fallen gold bullion has continued to climb and looks set to continue in the new year 2012.
Posted by Michael Moore at 9:07 PM