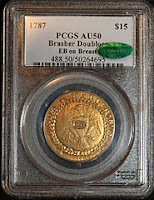 Blanchard and Co., the New Orleans-based coin and precious metals company recently brokered a deal in which extremely rare gold coin was sold for a record 7.4 million dollars.

The gold coin was sold to a Wall Street investment firm, the identity of which along with the seller, was not disclosed.

The rare Gold Coin was minted by Ephraim Brasher the goldsmith in 1787 and contains 26.66 grams of gold or just under an ounce. Worth only 15 dollars an ounce at the time the coin was struck, the gold value nowadays is something over 1500 dollars.
It is the only one of six coins of this type, called the doubloon due to its striking likeness to the Spanish doubloon. This one differs from the other five in that the distinctive hallmark is punch on the eagle's breast whereas the other five known doubloons have the hallmarked punched on the eagle's left wing.

The Brasher doubloon is considered the first American-made gold coin denominated in dollars. The U.S. Mint in Philadelphia did not begin striking coins until the 1790s, and foreign coins of various currencies were used in the nation's early years.

The gold coin, smaller than a half dollar must have looked very small indeed when it was delivered to the buyer in a large security truck after the sale.

The Brasher doubloon last changed hands in 2004 for $3 million. "We have known about it and coveted it for years," said Blanchard CEO Donald Doyle Jr.
Before the sale, the doubloon was sent to John Albanese of Certified Acceptance Corp. for grading and authentication, a consulting partner for Blanchard and well-established in the coin grading field. Albanese commented that he had previously made an offer of $5.5 million three years ago, but the offer was rejected at the time.

On the coin scale of 0 to 70 used in investment coin grading, Albanese graded the doubloon a 50. "It's a truly beautiful coin," he said.

Although such gold coins are few and far between, there are still many gold coins worth collecting. A modern day gold coin may not fetch $7.4 million dollars but it is still worth while buying a gold coin.
Posted by Michael Moore at 7:38 PM