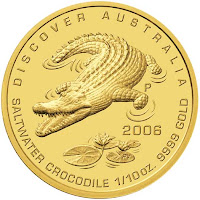 A new reason to buy gold in Australia has emerged.

Just recently the Reserve Bank of Australia, who sets the benchmark interest rate, reduced the cash or official interest rate twice in a row bringing the official cash rate to 4.25 per cent at the time of writing this.

In November the RBA cut the Interest Rates by 0.25% to 4.50% In December by 0.25% to 4.25%. In his public statement, Governor Glenn Stevens noted, slowing growth in China and the global economy, "sovereign credit and banking problems in Europe" have caused considerable turbulence in financial markets, with financing conditions becoming "much more difficult".

"This, together with precautionary behaviour by firms and households, means that the likelihood of a further material slowing in global growth has increased".

Easing commodity prices as a result of these factors has taken pressure off CPI inflation rates, which "afforded scope for a modest reduction in the cash rate".
This means the banks have, somewhat reluctantly of course, had to follow suit and reduce the mortgage rate for home loans. This is very nice for those with a mortgage (I am one of those) but it also means the saving rate for bonds and general bank savings is also reduced. Not good for savers.

The banks will not continue to pay high interest on savings when the interest rate has been cut. These rates will be reduced also. Something not generally mentioned in the media but the banks do issue paid ads announcing the changes not long after the rate cut.

Along with general inflation this means the annual interest rate will remain below 5 or 6 percent a year. When you consider that gold appreciates in value by around 20 percent per year this certainly makes gold a much better 'investment' than cash in the bank.

So to buy gold in Australia is now a much more attractive proposition than buying cash. Of course the banks won’t tell you that. Hardly in their interest, no pun intended.
Posted by Michael Moore at 2:09 AM