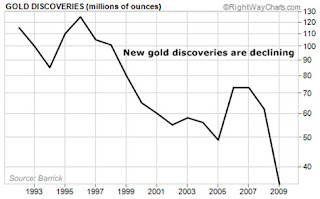 There is a gold shortage coming up.

The world is running low on gold and here's why.

As the standard of living in China and India increases more and more people there will be demanding gold. As an example, the Chinese middle class has been increasing and although is a tiny percentage of the overall Chinese population it is still bigger than the entire population of the US now. The Chinese government is actively encouraging their population to buy gold. This is a lot of gold demand in China alone. The same is happening in India and their demand for gold is continuing to increase.

This is on top of the extra demand by cautious and impatient investors who are not getting the results they expect from bonds and investments.

The world's biggest gold miner, Barrick Gold has noted that finding more and more viable gold deposits is becoming harder. The chart above shows how gold deposit discoveries are rapidly declining and we know what that means. The value of gold, quite apart from the decreasing dollar, is going to go up as demand outstrips supply.
According to Barrick,

"Current global mine production is in the order of 85 million ounces per annum, whereas… the last time the industry found that many ounces in a year was 1999."

But what about gold mining profits I hear some ask? Surely with the rising gold price there is more room for profit in existing mines. Well, like in other areas, the costs of mining gold have increased also. Not just explorations costs but also fuel, labor, infrastructure have all more than doubled over the past few years. It takes millions of dollars to start up a new mine and that is assuming it is feasible. The average is a two year wait on investment returns for a new gold mining company. Investors will not wait longer than that.

In addition all the 'easy' gold has been found and there is a chronic gold shortage.

There are large deposits but they are in either inhospitable or remote areas and expensive to reach. The Seabridge Gold KSM Deposit, for example, is very large but being in a far off corner of British Columbia in Canada it would cost far in excess of the return to even reach it, let alone extract the gold and ship it out.

Such a chronic gold shortage means that the gold price will continue to increase and this is probably the very best time to buy gold.
Posted by Michael Moore at 6:39 PM