Not enough gold to go around 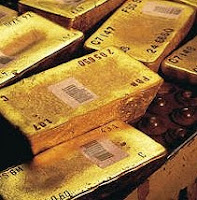 Is there not enough gold to go around?

A few indicators seem to point that way and if this is so then the current and future demand for gold is only going to drive the gold price up even further.

The SPDR Gold Trust GLD is in the news over their bumbling PR effort to assuage investors fears regarding how many gold bars are held in trust for GLD investors. The bar offered up as a GLD bar apparently turned out to be someone else's gold bar. So the rumors of GLD applying a 'fractional system' and not holding as many gold bars as needed to cover all the investors accounts continue. The fact that total ETF holdings now exceed total world production of gold is another indicator. Where are they getting their gold from?

And, by the way, if you have any 'shares' in the GLD, you do not actually own any gold.

Can you take physical possession of the gold?

The Trustee, the Bank of New York Mellon, does not deal directly with the public. The Trustee handles creation and redemption orders for the Trust’s shares with Authorized Participants, who deal in blocks of 100,000 shares. An individual investor wishing to exchange shares for physical gold would have to come to the appropriate arrangements with his or her broker.

This conveniently prevents a run by investors demanding their gold. As Mike Maloney, CEO of GoldSilver has pointed out, "If you can't hold it, you don't own it!"

Another indicator is the suppression of the gold price known by the Chinese and recently made public by WikiLeaks as follows:

"The U.S. and Europe have always suppressed the rising price of gold. They intend to weaken gold's function as an international reserve currency. They don't want to see other countries turning to gold reserves instead of the U.S. dollar or euro. Therefore, suppressing the price of gold is very beneficial for the U.S. in maintaining the U.S. dollar's role as the international reserve currency."

Shorting the futures gold price is one way to do this. Also applying a fractional system to imply there is more gold available than there actually is, is another.

Just a few days ago Precious-metals trader Dan Norcini noticed that 4,000 gold contracts -- representing about $740 million worth of 'virtual' gold bullion -- changed hands on the COMEX within just one minute. Norcini stated, "If it is not obvious by now, it should be -- an attempt by the Central Banks of the West to derail the rise in the gold price is currently underway."

If it becomes generally known and accepted there is not enough gold to go around, imagine what that would do to the price of gold AND the value of the dollar and euro?

Here is a speculative thought. Gadaffi held billions in gold. What if the western banks wanted that gold to make up a shortfall knowing that with the diminishing confidence in the dollar and euro, more countries would be demanding their gold back in the future? That future being now of course.

Hey who was it that demanded their gold back recently? Oh yes that Venezuela's chap, Hugo Chavez, President of the country. Venezuela owns 99 tones of gold in the UK and wants it back. That is 11 billion dollars worth. AND they are not the only ones.

Not long ago, the US Treasury annoounced it ran out of blanks for one ounce $50 American Gold Eagle coins (currently worth around $1900). How can you run out of blanks?

In addition, Robin Griffiths, of Cazenove recently make some interesting remarks in an interview with King World News. Cazenove, a British stockbroker and investment bank founded in 1823 by Philip Cazenove, is widely regarded to be the appointed stockbroker to Her Majesty the Queen.

Griffiths was asked about a recent trip to Hong Kong and responded, by stating that he considered Asia will be the principle buyers of gold for the rest of this year. He also indicated that the move into gold is being led by high net worth individuals.

He also indicated, "If I had to make a list of the great bubbles I am going to live through, I think gold is going to be one of the big ones. All of the gold ever mined in history just fills one Olympic swimming pool. There's not enough for all of those Indians and Chinese and central banks to have it. It is just genuinely in short supply."

Pension funds are now starting to accumulate gold to help stabilise their investments. However Pension funds buy in large amounts and this is likely to contribute to a bigger shortfall in gold availability.

In view of the above and other indicators to numerous to mention, perhaps there is not enough gold to go around.
Posted by Michael Moore at 6:51 PM