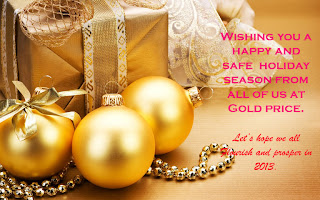 It is coming up to the end of the year and a look at why one should buy gold from the viewpoint of some prominent people around the world is fitting
This year, the Deutschebank called gold "good money" and paper "bad money".

The President of the German central bank, the Bundesbank, paid tribute to gold as "a timeless classic".

A leading member of the policy committee of the People's Bank of China calls the gold standard "an excellent monetary system".

In The China Post, a CNN reporter wrote that the "gold commission" plank in the 2012 Republican platform will "reverberate around the world".

The Subcommittee on Domestic Monetary Policy of the U.S. House of Representatives twice called on economist, historian, and gold standard advocate Lewis E. Lehrman to testify.

GoldMoney founder and GATA consultant James Turk, in an interview with  King World News, recently remarked that Western market manipulation can't stop the flow of gold into Asia and that paper gold owners eventually will realize that they don't really own the metal but rather a lot of counterparty risk. “At some point in the future, whether it’s next year or the year after that, people who own paper gold are going to recognize they have counterparty risk.  They don’t own gold, they only own exposure to the gold price and that exposure is dependent on their counterparty”.

According to Fund Manager Stephen Leeb, "There is a ritual we see in overnight trading. Gold is usually up $4 or $5 at around midnight or 1 a.m. East Coast time. I'll be watching gold trade at this time and I can't count the number of times that in just a minute or two, instead of gold being up $4 or $5, it's now down $20. No one is trading at 12 or 1 or 2 in the morning. Somebody is doing this and it always happens when there is no liquidity. So you have a game of desperation going on here and the Chinese are aware of this".

Well, gold is winning, and so should we all be.