Gold statistics do not lie – A hidden gold standard? 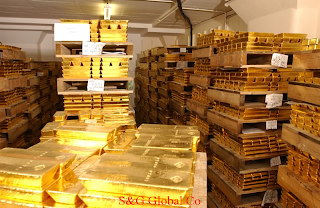 "If I asked you to leave something for your great grandkids in a package to be opened one hundred years from now, would you leave them a wad of hundred dollar bills or one hundred gold coins? If you had any brains you would pick the gold coins. I'd venture that Warren Buffet would also pick the coins. Why? Because we know that one hundred years from now the gold coins would represent value and purchasing power and the dollar might not exist. End of story."
- Richard Russell...04 May 2012

Is there a hidden gold standard we might ask? It seems far fetched to say so, but when you look at what is actually happening in the market place it does not look so far fetched after all.

On the one hand we have Bernanke's 'naughty gold, bad gold, smack bottom' approach while on the other hand the central banks are buying up gold as fast as they can get their oily hands on it.

Despite Bernanke's pooh poohing of gold, the bank have been happy to sell short gold, and buy it up while it is cheap.

And China, ever seeking the best deal, is buying it up like it is going out of fashion.

So I ask myself, 'Is there a hidden gold standard occurring here?'

The US Federal Reserve still maintains it holds 8000 tons of gold. You may remember when Ron Paul asked Bernanke point blank about why we still hold this official gold last year; Bernanke hemmed and hawed, and then came up with “because it’s tradition”. Don’t make me laugh.

Gold is gold and anyone who retains their common sense and wears a Wall Street suit knows jolly well that when the crunch time comes, the person who has the gold will hold the reigns.

Gold statistics do not lie. Swiss refiners are working around the clock to produce gold. Central banks around the world continuing to buy gold and Chinese imports this year are up 6 times on last year.

The selling we currently see is in the gold paper market. Short term speculators in precious metals getting out of their positions. This is a repeat of the 2008 correction when gold came down with many investors liquidating their positions. We all know what happened then. Gold rose sky high.

So the real gold market continues to be very strong and at some point the paper gold market is going to collapse as paper is worthless with no gold to back it.

The banks know this. Never mind the poo pooing of gold by the Buffets and Gates of the world.

Let’s see now …. Federal Reserve holds 8000 tones of gold. Central banks around the world buying up gold like crazy. Hmm, that sounds like a sort of hidden gold reserve to me. After all they are holding gold IN RESERVE. Because it is traditional, because it is nice, or just saving for a rainy day! I don’t think so. I think that Bernanke is talking down the gold price in support of the gold shorting that is going on. Reducing the value of paper gold means banks can buy gold cheap.

Not only that, but the US government has rebuffed calls to sell gold over the past few years, choosing not even to sell any to reduce their massive ever increasing deficit levels.

This despite the fact that since the gold standard was officially dropped under the Federal Reserve System the dollar has lost on the order of 85% of its value. That means the dollar is worth just a piddling 15 percent of what it was in the 1970s. Of course Bernanke does not mention that!

Tradition is not a criterion for sound investment and financial sense and he knows it.

Interestingly, heavyweights such as George Soros and John Paulson, to name but two are buying gold in hugh amounts. I am talking millions of dollars. Let’s face it; these guys know how to make money. They have been doing it for years. So why are they heavily investing in gold? Perhaps they see the writing on the wall.

Germany, the second biggest holder of gold bullion is looking at retrieving it from the US where it has been in storage for over 60 years. Venezuela saw the writing on the wall and snatched all its gold from overseas financial playground pretty damn smart. The BRICs* group are also seriously looking at alternatives to the US dollar as the world reserve currency. Does that include gold I wonder?

China is busy divesting itself of the billions of deteriorating dollars it has unwittingly accumulated, like they are going out of fashion (and of course they are) and using the money to buy up gold and not only gold but gold mines as well. They are not selling gold overseas (of course some gets out on the black market but only a tiny fraction of their production) and are doing the opposite, even encouraging its citizens to buy gold also.

Even the small sales made by the IMF on occasion have been to, wait for it, yes, Central Banks.

So as Wealth Wire puts it, 'all banks are on a "as the core balance sheet asset" standard.'

Yes, I think there IS a hidden gold standard and it looks like a case of, 'Don’t buy nasty horrid gold 'cos we want it all to ourselves when the crunch comes because the dollar ain't gonna be worth squat'. Now that’s a jolly good reason to buy gold if you ask me.

*In economics, BRIC is a grouping acronym that refers to the countries of Brazil, Russia, India and China, which are all deemed to be at a similar stage of newly advanced economic development. It is typically rendered as "the BRICs" or "the BRIC countries" or "the BRIC economies" or alternatively as the "Big Four".
http://en.wikipedia.org/wiki/BRIC

Posted by Michael Moore at 6:35 PM