The World is Buying Gold 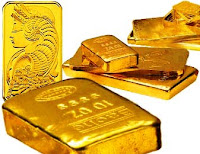 Russia, one of the biggest holders of gold bullion is buying gold hand over fist. It has recently increased its gold bullion reserves by a massive 19.5 tons last month according to the International Monetary Fund (IMF).

In fact a whopping 25.7 tons of gold with a value of 1.38 billion dollars have just been added to existing reserves in Belarus, Colombia, Kazakhstan, Mexico and Russia.

Bloomberg is also reporting that central banks are expanding their reserves of gold.

Information from the IMF indicates central banks and government institutions bought 142 tons last year while it is predicted that this year may mark purchases of ten times that according to Marcus Grubb, managing director of investment research at the London- based World Gold Council.

"Given gold's much more attractive levels in October, we would not be surprised if a similar trend of significantly more buying than is reflected by IMF data actually occurred during the month," UBS AG analyst in London, Edel Tully said.

Just recently, the president of Venezuela, Hugo Chavez, took delivery of the first batch of gold bullion. 160 tons from the Bank of England.

"We are bringing the gold back because unfortunately capital markets and the world economy are in turmoil, and for that reason it is preferable to seek protection," said Nelson Merentes, president of the Venezuelan central bank.

More than 80 percent of Venezuela's 211 tons of gold reserves are in the United Kingdom, mainly in the Bank of England and are valued at $11 billion.

The remaining 152 tons of its gold reserves, valued at $7.2 billion, are already in Venezuela's central bank vaults.

According to the Financial Times, Venezuela has the 15th largest gold reserves in the world. With more than 60 percent of its international reserves in gold, nearly eight times the regional average.

And China continues its goal of steadily building up its gold reserves including actively encouraging its citizens to buy gold.

Methinks a boom in the gold price is expected soon so now is the time to buy gold.
Posted by Michael Moore at 3:17 PM