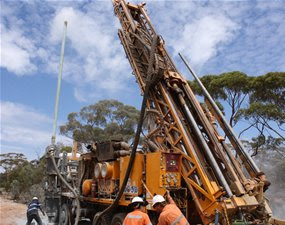 We are talking here mostly about companies listed on the various stock exchanges (although the information here can apply to private gold mining companies also). These are public companies and, although there are variations from country to country, the essentials are the same. All are public listed companies. All have a share price that varies from day to day depending on various factors, such their management style, production, future prospects and so forth, and all are involved either in exploration, mining or both.

It is a good idea, before one buys gold investments or shares in any public company in the gold mining sector, to really understand all the aspects of a company, who is running it, what style of management is used, what they actually do, what are their prospects, what are their assets, the balance sheet, etc. As in any type of financial arrangement, one should consult with ones financial advisors before embarking on any investment adventure.

Having said that, let's find out what sort of activities we can expect from a gold exploration and mining company.

These days, for serious gold mining, one is not looking for gold nuggets on the surface say in streams for example. That is panning for gold and is covered in the Prospecting Section.

For serious gold mining one is looking for a concentration of gold within minerals, usually of a type of rock. The concentration is measured in grams of gold per tone of ore. The more grams of gold per tone the better of course. Having 100 grams of gold per tone, although it does not seem very much, is considered a good find and would be well worth further exploration to see how far that ‘lode’ goes. If it is only a couple of feet then it would not be worth the expense of major mining equipment. But if the lode extends for some miles or kilometres then it would be well worth spending a lot of money mining the gold.

In short, it is not just a matter of how many grams or ounces in each tone of ore one can recover, it is also how big is the lode or lodes and how many thousands of ounces of gold can one recover.

Mining
Mining of gold is usually either open cut or underground. Most gold on the surface these days has been already located and mined although some pockets do get found on occasion. Most gold is mined from under the earth and this can be either a few feet down or even up to many hundreds of feet. Of course underground mining is generally more expensive than open cut as more energy and equipment has to be expended to shore up the mines and bring the ore to the surface. Not only that but more safety measures are required and more equipment is needed.

This all has to be taken into account when assessing the cost of extracting the gold and there needs to be sufficient gold available to be extracted to make it worth while for the mining company to go forth and continue with the mining. It can be noted here that, the higher the value of gold in the market place, the more viable it becomes to mine gold that is more difficultly and costly to mine and the lower grams per tone of ore can be mined. With the price of gold 10 years ago, lower grams of gold ore would not have been viable due to the cost of mining and processing. These days, as the price of gold continues to rise, mines containing a lower amount of gold per tone of ore become more viable to mine.

More on Gold Mining
Generally when a mining or exploration company discovers a viable and worth while lode they will apply for a licence. How this is done various from country to country and even state to state in some cases and is not really of much interest to investors of mining companies other than the fact that all mining companies do need to have all the relevant licenses and lease agreements required by law. This is something that should be listed in any mining company’s prospectus and should be looked for to establish the authenticity of the company. A company with no licence and or leasing agreements would not be able to mine and is probably not a bona fide mining company at all.

Mining companies lease tenements or blocks. These have been established to contain lodes, mineral rock in which the metal is contained. Sometimes you see mentioned Mother Lode. A mother load is an ore deposit from which a placer is derived; the mother rock of a placer (Placer: A deposit of sand or gravel that contains particles of gold, gemstones, or other heavy minerals of value. They are commonly stream gravels and beach sands).

Mining Company Structure
Important to consider also the mining company itself. Is it a public company already floated on the stock exchange? Is it a private company looking to initiate an IPO (Initial Public Offering) and list on the exchange?

Who runs the company? Are they experienced in management, geology and, importantly finance?

What are the governance policies of the company? What is the offer to shareholders? The history of the company. All these factors should be taken into consideration. Just finding a large deposit of gold is not enough. It has to be managed well, correctly assessed and the finances should be in place to extract the gold satisfactory and at a profit otherwise the company could go bust, regardless of how much gold they have. They could lose their license to mine or the lease hold and the gold could well end up in someone else's hands.

Future Prospects
Of course the future of the company is dependent on how much gold they expect to dig up over a period of time. If they expect to dig up, say 20,000 ounces a year for twenty years then that sounds quite viable. But if the gold they have discovered runs out after two years then the share price is going to drop and the company go bust. So how long the gold will last is an important question. The gold price has a bearing also as that can determine the viability of extracting the gold.

In future articles we will take up in more detail some of the aspects of gold exploration and mining such as how to read a gold mining prospectus for example and how mining companies deal with a fluctuating gold price.
Posted by Michael Moore at 4:22 PM