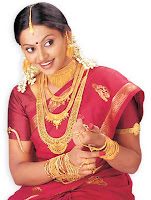 India is estimated to be the largest user of gold in the world.

What is happening here?

A rapidly rising inflation of 8.65 percent is being attributed to the hungry demand for precious metals.

"Rapid inflation is eroding the earnings of the common man. One has to understand how the import of gold has reached $9 billion for a month, while the yearly average is around $22 billion," said Sudhir Chakraborty, bullion analyst at Standard Chartered bank.

"Even as inflation and a widening trade deficit to $15 billion in May continues to weigh on the minds of Indian investors, the demand for fresh gold has continued to grow. This is very confusing, especially when one sees it against the backdrop of a 400% rise in the value of the rupee over the last decade." said bullion analyst Anand Patnaik with a brokerage firm.

And India's central bank, the Reserve Bank of India's decision to grant licenses to seven more banks to import bullion has contributed to the demand.

As jewellers are now getting easy supplies, this is also helping to push up demand.

India's commerce and industry minister Anand Sharma releasing some trade figures recently and pointed out that imports in pearls and precious stones, have risen 24.6% to $ 5.20 billion, gold and silver by 222% to $ 13.5 billion and iron and steel by 13% to $ 1.80 billion.

Rajesh Shukla of the centre for Macro Consumer Research recently pointed out, "People in India have accepted high inflation as a reality of life." Noting that Indians use gold as a hedge against inflation, Shukla said this would be partly responsible for the spike in imports and added that high imports reflected a strong demand for the yellow metal, despite the weakening of the rupee.

"The gold story is puzzling," added A. S Kirolar, a financial analyst. "Consumers are shying away from stocks and bonds and heading to safe assets like gold and real estate, but one cannot understand this given the meagre 12% growth in imports of petroleum and oil products."

Another analyst Shabir Lakdawala, stated that demand for precious metals in 2010 was way stronger than in previous years. "In 2009, India had reported a 19% decline, when the worst monsoon in nearly four decades had dented bullion sales." he said.

According to the World Gold Council in their new publication 'India: Heart of Gold', Indian gold demand has grown steadily 25 per cent despite a 400 per cent price rise of the rupee in the last decade, India is reaffirmed as a key driver of global gold demand, with an expected increase by over 30 per cent in real terms.

This research indicates that by 2020 the cumulative annual demand for gold in India will increase to excess of 1200 tonnes or approximately Rs. 2.5 trillion, at current prices and Indian gold looks set to be the biggest gold holding in the world in the not to distant future.
Posted by Michael Moore at 7:15 PM