Buy Gold at your Local ATM 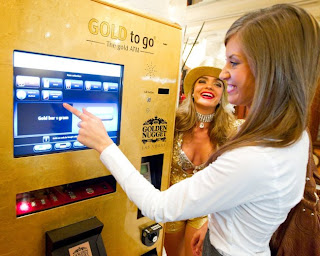 "Today, there is no government agency, that would pay for the payment promises of Alexander the Great, Julius Caesar, Louis XIV, Peter the Great, Napoleon or Hitler. They were powerful men in their time, but no bank will cash their checks today. If you take a gold bar, however, that once lay in their treasuries, you will receive its equivalent value anywhere in the world. The durability and universality of gold gives it a money-like authority, that no other money has." (William Rees-Mogg – former chief editor of the London Times)

It will not be long now before one can buy gold at your local ATM.

Currently there are 50 or so ATMs around the planet in which one can deposit cash and watch the machine spit out a small gold bullion bar. These are dotted over the planetary landscape with most currently being in Germany and Abu Dhabi.

In Abu Dhabi the cheapest gold ingots range between Dh450 and Dh550 (500 Dh or AED equals around 133 US dollars) depending on the existing gold price.

The general manager of the Emirates Palace hotel, Hans Olbertz, stated how happy he was to introduce the gold-plated Gold to Go machine to the luxury hotel's marble lobby a year ago.

"The Emirates Palace is already a very attractive venue for guests and visitors, and the gold machine adds another dimension of attractive luxury within the hotel," Mr Olbertz said. "We have a lot of people taking pictures in front of the machine, and buying gold with the Emirates Palace logo as a fantastic souvenir to take back home and give as a gift."

Any day one can see the constant flash of cameras as people stop just to take a picture of the gold ATM. Nour Yahya, 29, was just one who was impressed by the concept. "I wasn't going to buy the gold, but I really couldn't resist, it's just such a cool idea," she said.

Each day around 150 transactions are made by tourists and guests of the hotel according to Mr Olbertz pointing out that it is, "a significant rise from the 50 to 100 pieces of gold that were sold daily a year ago." Mr Olbertz went on, "It hasn't lost any of its attraction over the past year, even with the rise in the price of gold," he said.

"When we have big groups of tourists coming in, they just love it, and if one of them buys gold, the others are quick to follow."

Tourists also do not view their purchases as investments, Mr Olbertz commented, despite gold selling for about US$1,500 (Dh5,509) an ounce in today's market.

"This is more about buying a souvenir with beautiful packaging and the logo of the hotel; something they cannot get anywhere else in the world."

Thomas Geissler, the chief executive of Ex Oriente Lux AG and managing director of Gold to Go, said the 2.5 gram piece of gold, engraved with the hotel's logo, has proven to be the most popular of all the machine's offerings.

"The 1-gram piece is no longer available, because we have plans to replace it with something even more special," he said indicating that a 1-gram gold coin will be introduced into the machine in coming weeks. It is considered to be the only one of its kind that can be used as legal tender, but is more popularly a commemorative coin.

"There are plans to place two more Gold to Go machines around Abu Dhabi, in undisclosed locations. The machines are ready," Mr Geissler said, "and we are just waiting for the final paperwork before we reveal our plans."

Earlier this year, the machines were placed on the ground floor and the 124th floor of the Burj Khalifa, as well as in the Dubai Mall, in the Mall of the Emirates and in the Atlantis Hotel.

"We are really happy to have come to the UAE, where there is so much interest in our gold vending machine," Mr Geissler said.

"And although we have plans for more machines in Abu Dhabi, our love and respect will also go to the first one we installed, in Emirates Palace."

The GOLD to go® gold vending machines come in a variety of versions. Each machine can either be safely bolted to the floor or to a back wall. The location of each machine is chosen with great care and must fulfil a number of criteria before being accepted as a secure location.

The special gold leaf finishing is a true eye catcher. Menu navigation is works with a 19″ inch touch screen. The ATM can be delivered with optional advertising screens.

All GOLD to go® gold vending machines accept the standard credit cards and one can also pay cash anytime.

The software application of the GOLD to go® ATM's is controlled by an internal which is connected to the German system-network via a secure VPN tunnel. Data connection is conducted via a LAN.

Each Gold ATM can issue up to ten products. It is easy to use with a Self-explanatory user interface via a 19 inch touch screen in the local language or multilingual. It also has a windowed showcase of all the products available for verification of purchase decision. There is money laundering and fraud protection incorporated into the machine.

The cost of the gold bars are updated every ten minutes and there is Comprehensive security mechanisms for goods issue and charging and you also get a receipt with the gold bar when you purchase.

Gold ATMs can be currently found in:

There are plans to introduce the gold ATM in major cities around the world. The Gold ATMs are not just a novelty anymore, but a serious availability to buy gold on the spot and it will not be long now before you will be able to buy gold at your local ATM.
Posted by Michael Moore at 12:42 AM