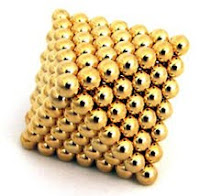 Gold is green it seems when it comes to solar cells. By sandwiching a layer of gold nanoparticles between two solar subcells that absorb light, up to twenty percent more light can be absorbed and that means more energy.

A UCLA Henry Samueli School of Engineering team have found they can utilise gold’s enhanced "plasmonic effect", or the ability of metal to absorb sunlight, by using gold nanoparticles to help create a strong electromagnetic current.

In their experiments, a layer of gold nanoparticles are sandwiched between two light-absorbing subcells in a tandem polymer organic solar cell. This creates the plasmonic effect which ultimately increases the energy created by the solar cells.
Professor Yang Yang says the result is a highly efficient organic solar cell using a relatively simple idea. "The plasmonic effect happening in the middle of the interconnecting layer can enhance both the top and bottom subcells simultaneously - a "sweet spot" - leading to an improvement in the power conversion efficiency of the tandem solar cell from 5.22 percent to 6.24 percent. The enhancement ratio is as high as 20 percent."

According to the University, this is the first time a plasmonic-enhanced organic solar cell, and also the first time metal nanostructures have been successfully incorporated into an organic photovoltaic device.

The organic photovoltiacs field is relatively new and still in its infancy compared to the well established conventional silicon-based solar panels and thin-film solar cells. But the UCLA team consider there is a bright future for organic photovoltaics which they say 'could provide opportunities for more highly-efficient, multi-stacked tandem solar cells.'

According to the UCLA Team, ‘Carbon-based organic photovoltaic cells, which use organic polymers or small molecules as semiconductors, are significantly thinner and cheaper than their inorganic silicon-based counterparts. Unfortunately, they are also much less efficient at converting sunlight into electricity. That could be on its way to changing, however, as an international team of researchers have reportedly boosted the efficiency of organic photovoltaic cells by 20 percent ... with some help from gold nanoparticles.'

And a research team from France and Denmark are also exploring using gold nanodots as a way of increasing energy output from organic solar cells. They are looking at adding a layer of gold half a nanometre thick, to the surface of indium-tin oxide-coated glass.

Assistant Professor of chemistry, Dr Ross Hatton, at the University of Warwick, a specialist in nano-structured electrodes for organic photovoltiacs recently stated, "The need to improve upon iridium-tin oxide as an electrode material is clear and it is remarkable that such a low coverage of gold is so effective in facilitating charge carrier extraction. The methods reported by Dr Cattin and co-workers for determining fractional surface coverage are key tools for probing this important class of electrode buffer layer."

Dr Richard Holliday, the director of Technology at the World Gold Council also commented recently, "Gold has a strong track record of use in the electronics industry, largely due to its high conductivity, chemical stability and compatibility with other elements. The combination of properties makes gold an idea candidate for conductive layers in photovoltaics. Through precise control of metal thickness, manufacturers and able to use gold cost-effectively."

When it comes to solar energy efficiency it seems that gold is indeed green.
Posted by Michael Moore at 9:31 PM