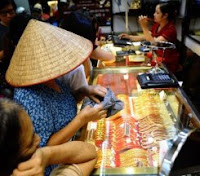 A Vietnamese sociologist once said, "Empires may fall, currencies may change. ... Gold will always survive."

It is easy to buy gold in Vietnam. In fact it is almost de rigueur. The Saigon Jewelry Company (SJC), a government owned company, has a monopoly on Vietnamese gold bars manufactured in Vietnam.

Pure Swiss 999.9 parts gold per thousand is used in these gold bars. How to buy some of the best and purest gold bars? Well there is a SJC located in every major city in Vietnam from Hanoi to Da Nang, from Nha Trang to Ho Ch Minh City.

You can buy gold ingots, as the smaller gold bars are known, and these range from one gram up to twenty-five grams and can be bought over the counter.

For the Vietnamese, hoarding or keeping gold at home is far better than having cash in the bank.

And even though one ounce of gold costs about a hundred dollars more in Hanoi than anywhere else in the world, it is still considered more valuable than cash. A 60-year-old retiree, Truong Van Hue, stated, "I still like to keep my savings in gold. It's safe for retired people like me. I can sell the gold any time, anywhere, when I need cash."

This has a lot to do with Vietnam's 18 percent inflation rate and a unstable currency, the dong and financial measures initiated last summer include a decree that placed the gold bullion business of Saigon Jewelry Company, a dominant processor and trader, under the control of the central bank.

Many Vietnamese prefer to keep their savings in gold traditionally as well as due to the lesser interest rate offered by the banks. Poor returns in the real estate and stock markets and fears of a potential devaluation in the Dong later this year have also added fuel to the rush to buy gold in Vietnam.

"People have tried to control the damage by fleeing into gold," said Le Dang Doanh, a former senior government economist.

Vietnam's love of the yellow metal is centuries-old, rooted in a history of strife, warfare and want. "Empires may fall, currencies may change... gold will always survive," said sociologist Vu Duc Vuong.

According to Government estimates, between 300 and 500 tons of gold are privately held by Vietnamese citizens outside of the banking system and mostly in their own homes, the central bank governor indicated recently. Bank officials would like this gold to be placed in banks to improve leverage to stabilise the economy.

"If the profit is a little higher and the banks prove their credibility, I expect 80 percent of the public will deposit their gold," Nguyen Thanh Truc, CEO of the Agribank Jewelry Company pointed out.

People on Hanoi's Ha Trung Street, a hub of the busy gold trade, are sceptical of the government's efforts.

"They will make it a bit harder, but I believe there will always be ways to trade the bars," said Tran Hoang Long, a 40-year-old gold trader.

However, it seems likely that individuals will continue to buy gold in Vietnam to protect their assets regardless of the price in Dong.
Posted by Michael Moore at 5:49 PM