The Great Gold Buy Back 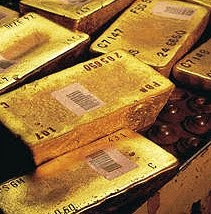 As the US currency continues to slump, now reaching the lowest since 2009, the great gold buy back has began.

Where as banks were at one time selling off gold as fast as they could, now they are falling over themselves to buy gold back again.

Gold has reach a record highest ever no less than 14 times this month (April 2011) and Central banks are now buying gold to reduce their reliance on the dollar as a reserve currency. In other words the banks are changing their reserve currency from dollars to gold.

Robert McEwen, the chief executive officer of producer U.S. Gold Corp indicated that as developing countries accelerate purchases, gold may very well reach $2,000 an ounce this year, compared with a record of $1,569.80 today in New York. "China is out to have more gold than America, and Russia is aspiring to the same,” McEwen said in an interview recently at a Bloomberg Link conference in New York. “When you have debt, you don't have a lot of flexibility. China wants to show its currency has more backing than the U.S."

In 2010, central banks started to buy gold and became net buyers for the first time in two decades. 87 tons of gold in official-sector was purchased by countries including Bolivia, Sri Lanka and Mauritius, according World Gold Council information.
China, with just 1.6 percent of its reserves in gold, is expected to invest more than $1 trillion in bullion. Euro Pacific Capital's Michael Pento said. "China wants to be an international player, and they need to own more gold than they currently have."

As of April, China was the sixth-largest official holder of gold, with 1,054.1 tons, while the U.S. has the most, with 8,133.5 tons, or 74.8 percent of the nation’s currency reserves according to World Gold Council estimates.

The Fed recently stated it would buy $600 billion in U.S. Treasuries through June. This will certainly have an affect on inflation, spur other nations to divest themselves of the dollar and increase their buy gold strategy.

"The Federal Funds rate would have to rise to 'Volcker' levels before gold enters a bear market …" said Gold Corp.’s McEwen, who is expecting the metal to rise to $5,000 an ounce over the next three to four years.

The value of gold has increased by 10 percent this year, continuing a ten year record of gains. Gold has risen sixfold from a low in 1999 and the all-time inflation adjusted record is now $2,338.92, based on the value on Jan. 21, 1980, according to the calculator on the Federal Reserve Bank of Minneapolis web site.

Although former Fed Chairman Paul Volcker ended gold's rally to a then-record $873 by raising borrowing costs to 20 percent in March 1980, Bernanke is very unlikely to attempt that strategy given the current level of sovereign debt, and so the great buy gold back by the central banks lead by China will continue.
Posted by Michael Moore at 6:28 PM