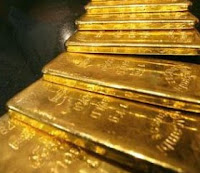 The Chinese population of over 1.3 billion have taken up the cry to buy gold and are doing so in vast numbers.

"We are entering a period of strong seasonal growth in gold demand and Chinese New Year is a big part of that," said Brien Lundin, editor of Gold Newsletter. "Physical demand has been supporting the gold prices on the downside even during the typical slack periods, and I expect that upcoming increase in demand will also support the price, but at higher levels."

Chinese are buying gold like hot cakes as the Chinese New Year, known also as Lunar New Year, begins on February the 3rd and ends two weeks later on the 15 with the Lantern Festival.

"Chinese gold and silver demand has been phenomenal ahead of the New Year holiday," said Adrian Ash, head of research at BullionVault.com, a leading online service for gold bullion trading and ownership, citing comments from dealers among others. Shipments have been "heavy" and began very early, in mid-December, he said.

"It's really simple," said Cary Pinkowski, chief executive officer of Astur. "China banned gold ownership for most of the 20th century and that's over. China has a savings rate of more than 30%" and "an official inflation rate of 10%."

"The Chinese will buy more and more gold just as every other civilization has in inflationary times and with their high savings rates, they have the money to do it," Pinkowski said.

And buy gold they do.

According to a BullionVault analysis, based on GFMS data courtesy of the World Gold Council, since 2005, the January through March period has seen China's private household gold buying raise an average 22% from the previous nine months,

"Long term, that's meant Chinese households have put an ever-greater proportion of their fast-growing annual savings into gold," said Ash, with that portion growing from 0.8% of retained income in 2001 to a forecast of more than 1.7% in 2010.
To substantiate this, the number of gold savings accounts opened by the Industrial and Commercial Bank of China Ltd. Has grown by over one million and with little promotion or marketing, "... an extraordinary pace of demand growth," said Martin Hennecke, associate director at Tyche Group in Hong Kong.

"China is in the process of overtaking India as the biggest national buyer of gold," said Julian Phillips, an editor at GoldForecaster.com. "At a minimum, the two countries take half the newly-mined gold and the figure is rising."

Seems the canny Chinese understand the value of gold as compared to the value of currency and the Chinese demand to buy gold looks set to continue.
Posted by Michael Moore at 7:34 PM