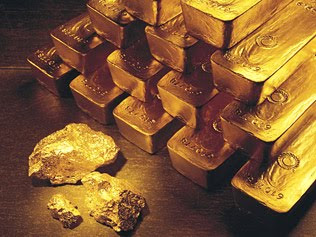 A transformation has been occurring in the gold arena over the past few years and this looks set to continue as the recession continues to languish and spread around the financial world like a fast moving virus.

Jewelery has always been the traditional outlet for gold sales for many years but now this is being overtaken by, what one analyst termed "a veracious demand for gold bullion by traditional investors". Demand usually leads the price so this might partially explain why the price of gold has increased from an average of 250 dollars an ounce in 2000 to over 1200 dollars now in 2010. However, if adjusted for inflation it could be said that there is still a long way to go and a price of 2500 for an ounce of gold is very much on the cards in the not too distant future.

What goes around comes around and it seems that buying gold is definitely the investor flavour right now.

SPDR Gold Shares, the worlds largest gold exchange traded fund, is reported to hold over 1280 tonnes of bullion. Assuming that is correct, it means that this fund alone now holds more gold bullion than many of the central banks.

This heavy buying has resulted in the sale of gold bullion overtaking the gold jewelery market for the first time in 30 years. GFMS, the consultancy firm that compiles benchmark supply-and-demand data on the precious metal, also stated early in 2010 that this year "gold investment demand doubled to 1,820 tonnes in 2009, while jewellery purchases fell by 23 per cent to 1,687 tonnes, a 21-year low."

GFMS also indicated that gold jewellery demand has fallen by a third from a peak of 3,294 tonnes in 1997, when gold was trading below $500 an ounce.

The other major change in the gold market is increasing trend of central banks to now buy gold bullion. For 20 years banks were the sellers of gold. But that trend has now reversed as banks in Europe slow down their gold sales and banks in China, India and Russia and the south Americas increase their gold buying significantly.
A Barclays Capital precious-metals analyst in London, Suki Cooper, strongly believes for the first time in over 15 years, central banks will now be the major net buyers of bullion this year.

India's purchase of 200 tonnes of the IMF gold, Beijing's announcement it had effectively doubled its gold reserves and was now the fifth largest holder of gold all seem to indicate a serious preference for gold over currency.

This trend towards gold was recently highlighted by the Swiss bank, UBS, which found that almost a quarter of central banks believed gold would become the most important reserve asset in the next 25 years.

When it comes to the crunch, it seems the big boys in banking know what is the safest way to hold their assets
Posted by Michael Moore at 7:10 PM